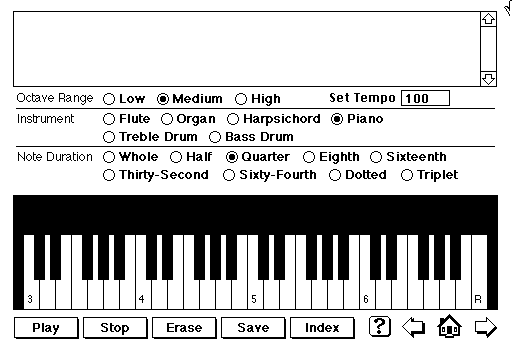 Composer is a simple music composition stack that allows you to enter notes via a piano keyboard. Notes can be entered in various durations. After a song is entered, it can be played back using one of several instruments. All the saved songs can be indexed and the index can be used to navigate to a particular song. There is a help card included.
This stack is shareware. A ten dollar shareware fee is requested.

Reviewer: Emily Dietz - favoritefavoritefavoritefavorite - May 9, 2018
Subject: Does Music Composition Really Make Notation Easier?
Music Composition (aka Composer 1.0) was created by Dennis E Henley on June 14, 1993. This software is intended for composers, songwriters, and makes composing songs easier for beginners. It operates by allowing users to enter a note for whatever duration they would like (e.g. whole note, half note, quarter note, etc.). The user is allowed to play back songs once the song has been entered and it can be played back to them using one of a various set of instruments offered, including Piano, Harpsichord, Organ, Flute, Bass Drum, and Treble Drum. The user is also allowed to set the octave range and can choose between low, medium, or high an example of how they would use it is if they were composing a song for an Alto, they would most likely stay in the mid-3 to mid-5 ranges, so they would choose the medium range option. In addition to all of this, it allows you to set your BPM (Beats Per Minute) under “Set Tempo” in the stack. Additionally, users can index their created songs and once it is indexed, the index can be navigated to search a specific song. As a songwriter today I think that this stack would have been efficient and effective if used properly, but it is a bit slow and obviously not as intuitive as composing programs, such as Finale today. I think the overall goal of this stack is to make it easier to compose songs, but in 1993 it would have been quicker and more intuitive to compose songs at the piano bench than it would have been on this stack. However, with that said, this could also be used to input and index songs that have already been written to save them electronically, which I think would put this stack to better usage. Additionally, this stack can only write melodies because it does not allow for chords (more than one not to play at a time).

Uploaded by HyperCard Online on August 11, 2017